On my second full day in Zagreb I met up with my college friend David. We met around noon so we headed into the city center for lunch before leaving for his house. I’ve mentioned in a previous post how my initial encounter with Croatian cuisine came in the form of cheese burek shared with David and other friends during our time together in Los Angeles. So when we met in Zagreb and David asked what I wanted for lunch, naturally I asked for burek. My answer dumbfounded him; why would I want burek, of all things? Surely a slice of pizza was a more sensible selection. Eventually we settled on a bakery just off the main square where David could get his pizza, and I could get my burek. 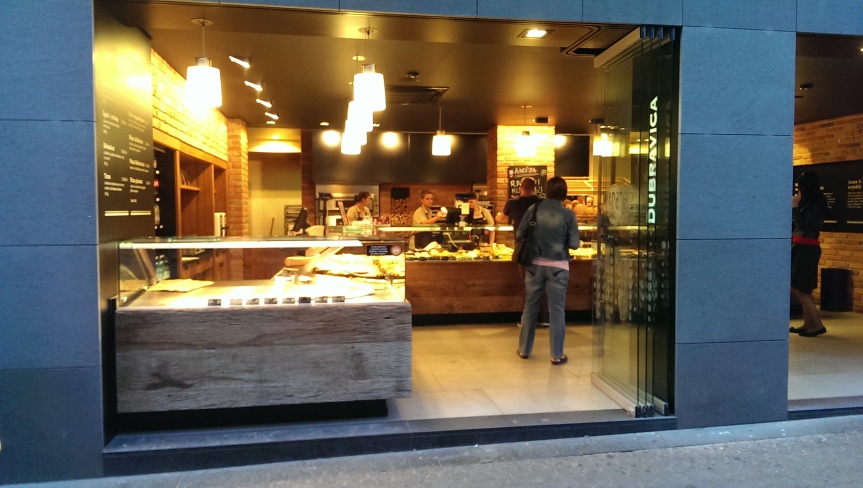 I ducked into a nearby grocery store and picked up my first Croatian beer: Ozujsko, perhaps the most ubiquitous brand of Croatian beers. 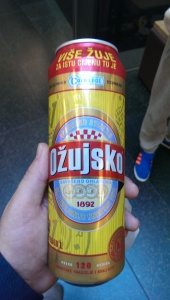 The burek wasn’t the cheese filled pastry that I had known enjoyed in my college days, but a delightfully flaky and greasy envelope of meat and cheese. I waited several years for this burek, and it was worth it. 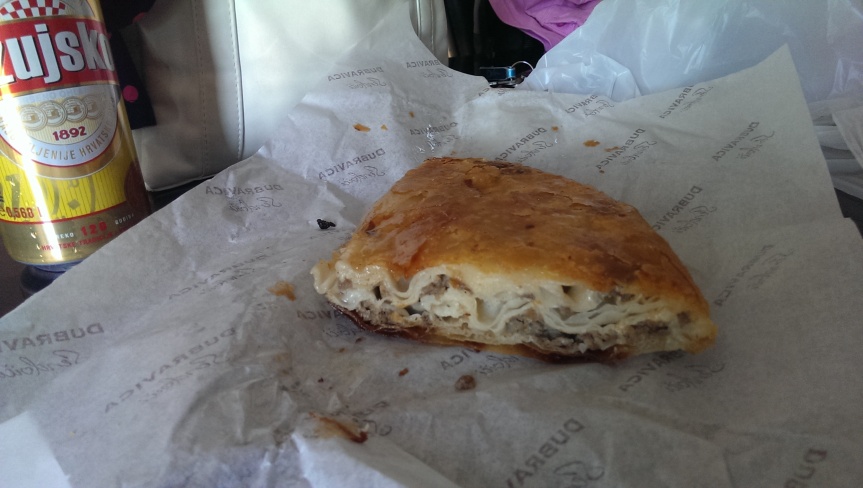 That evening I rendezvoused with Z and her sister at the national theater. We explored central Zagreb, eventually making our way across the Bloody Bridge to Tkalčićeva Street. Tkalčićeva Street is a long, winding street that is lined with restaurants, bars and cafes. The weather had been perfect since my arrival, and it was another beautiful evening, so the outdoor patios along Tkalčićeva Street were packed with locals and tourists alike enjoying the mild climes. 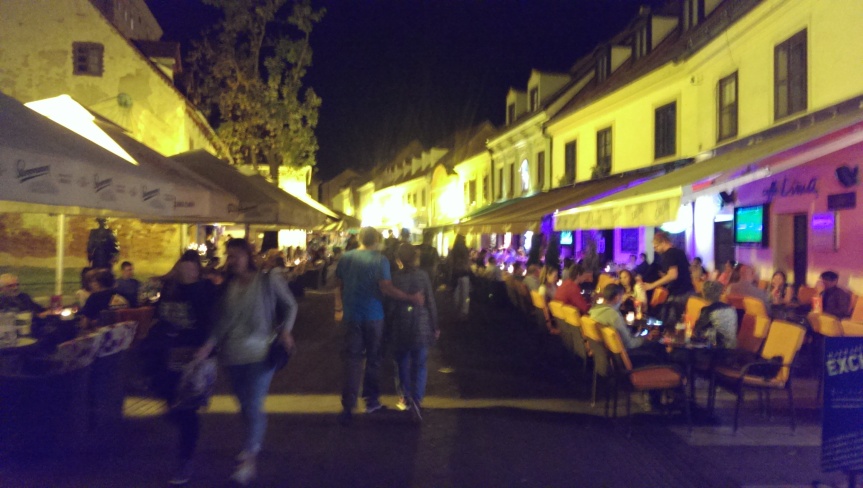 Once we chose an establishment for dinner I indulged in some classic Zagreb fare: breaded chicken cutlet stuffed with ham and cheese, along with cevapi with grilled mushrooms. 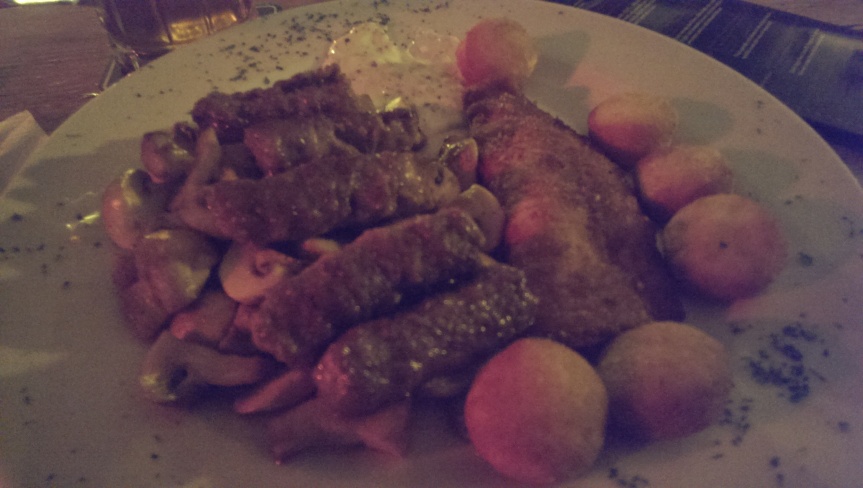 This was the end of the perfect weather during my visit. As it turned out, everyone out on Tkalčićeva Street that night had been enjoying the last night of summer. The following day, autumn was in full swing. This meant persistent rain for the rest of my stay in Croatia.

After a day of conferencing, and a socialist sightseeing excursion conducted under increasingly inclement weather, I found myself alone in my rented apartment. I had a bunch of kuna burning a whole in my pocket, so I went down the block to the nicest restaurant in the neighborhood and treated myself to a posh dinner. I decided to broaden my experience of Zagreb cuisine, so I tried a different stuffed meat dish: Zagrebački odrezak, veal steak stuffed with meat and cheese. I also switched beer brands, washing down my pomme frittes with Karlovačko. 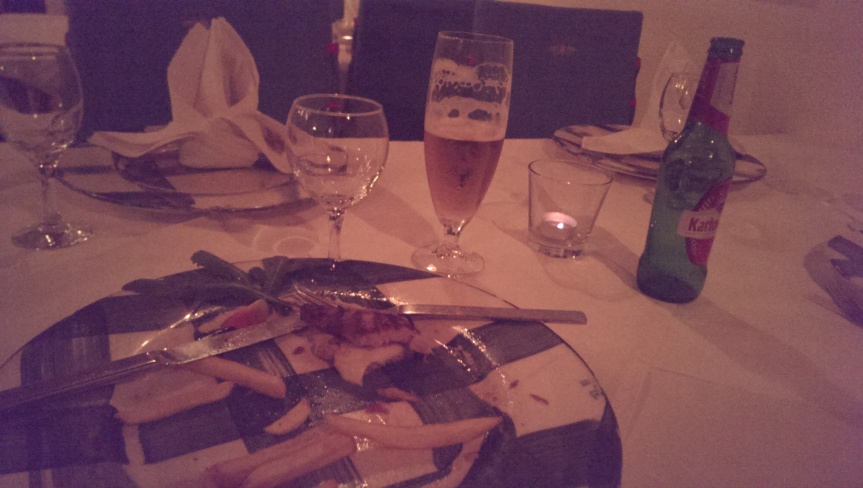 After the final day of the conference, a cohort of attendees went for after dinner drinks and dancing at Club Spunk (there might be a mishap of translation here…but then again, maybe not). 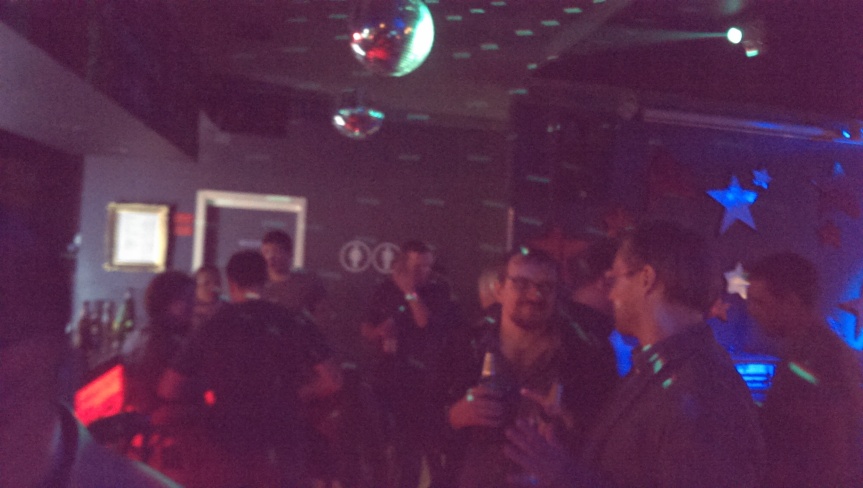 David met me here when he got off work around midnight. He had not only been a DJ in Croatia (one of the biggest for about a year, he told me), but also managed a successful party promotion business. So David is intimately familiar with the local nightlife, and he wanted to share his experience of Zagreb after dark. I reminded him that I had a flight to catch in the morning, and needed to get at least some sleep beforehand. He assured me that he understood, and that we would only be out for “a couple of drinks.”

We first went to his friends’ apartment on the outskirts of the city. There was a small group there celebrating their friend’s 24th birthday; they had been partying most of the day, and the birthday boy’s intoxicated state was well advanced when we arrived. As with virtually every Croat I met in Zagreb, they all spoke excellent English, and were very interested to meet David’s American friend from college.They welcomed me into their home and we sat in a circle in the living room, passing around beer and homemade rakija. They wanted to know if Southern California was like Beverly Hills 90210, they wanted to know my opinion of Donald Trump, they wanted to know what I thought of their country. For at least two hours we talked enthusiastically about these topics and others. Finally we made our fond farewells and departed, having picked up two new compatriots accompanying us to the nightclub.

As David explained, we were not going to a standard nightclub. This was an “underground” event, taking place in a commercial center after hours. Apparently it was a special event with a renowned German DJ presiding. When we arrived, the area was shrouded in darkness; we passed what appeared to be shops, cafes, and restaurants, but they were all closed and unlit. In the center of this shopping complex was a tennis court; I would have to see the site in daylight to really make sense of it. We moved toward the throbbing sound of deep bass, following the music up a flight of stairs where a burly bouncer stood sentinel, collecting our kuna cover before allowing us in. The music was deep and loud, the room sparsely lit with dull red bulbs and a solitary disco ball. Sadly my only photos of the event are murky and fail to capture the ambiance of the event, but I’ve included a few indistinct snapshots to at least convey the spirit of the scene. 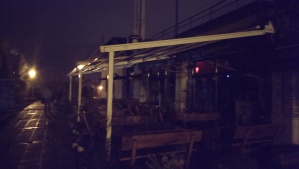 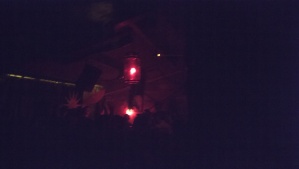 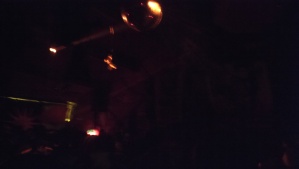 After spending some time taking in the scene, and downing a few more beers, David asked if I was ready to go. I said I was and checked my watch: it was nearly 5 AM.

When we got back into central Zagreb David drove past my apartment, explaining that there was a place nearby with excellent sandwiches. Alas, they were not open this early in the morning and would not be serving for several hours. We ventured a little further and found a cafeteria that was open all night. 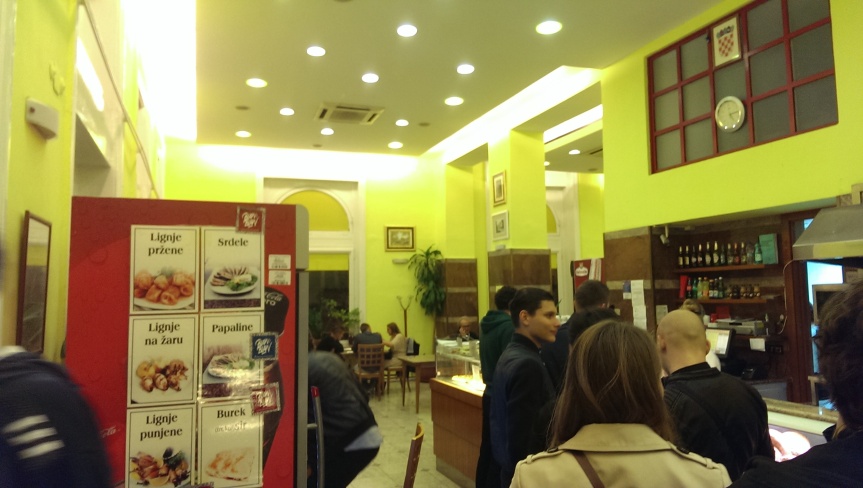 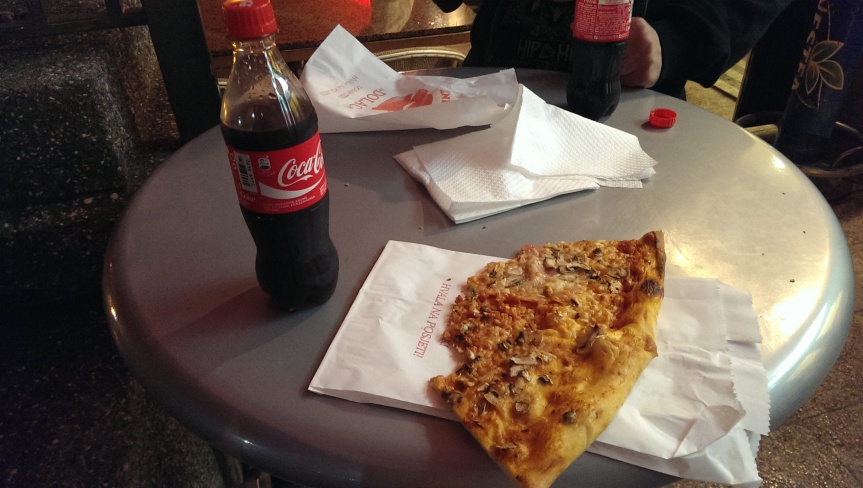 David pulled up in front of my apartment and I said thanks and farewell to my friend. I had long imagined our eventual reunion in Zagreb, and it had finally come to pass. Feeling simultaneously drained and invigorated by the evening’s events, I climbed the stairs to the apartment and slipped inside, easing onto the bed as dawn brightened the sky.