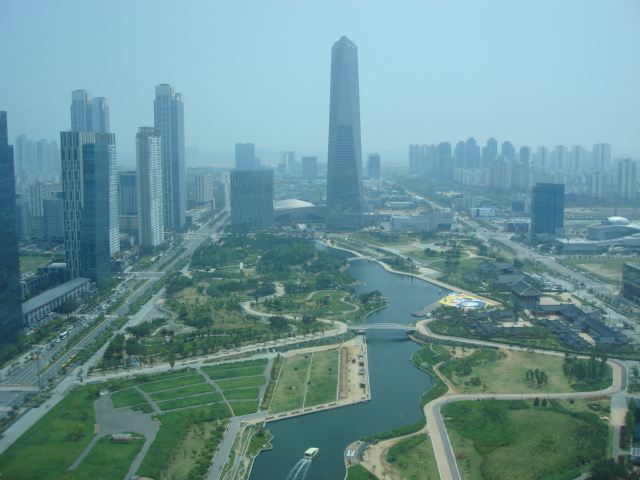 While in Seoul, South Korea this summer I had the opportunity to visit Songdo City, one of the most comprehensive smart city developments in existence. Located about an hour-long train ride from Seoul, Songdo is located in the Incheon Free Economic Zone (IFEZ) near Incheon Airport. As part of a Korean Free Economic Zone, Songdo is overseen and administered by IFEZ, and this gives Songdo a strange sense that it is not so much a municipality as an international corporate-financial project. Songdo is also a master-planned built-from-scratch development, founded on land that was dredged from the Yellow Sea. 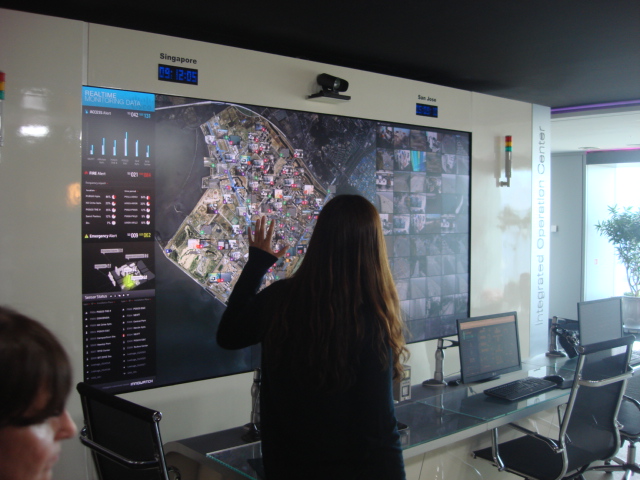 Songdo administrators refer to the development as U-city rather than “smart city,” where the U stands for “ubiquitous computing”. Networked infrastructure and sensor technology is integrated throughout Songdo city. Our tour group visited the Cisco company offices where we saw demonstrations of this networked monitoring and surveillance. This demonstration included a dramatization of a child being reported missing in the city, and showed how the child’s image and name could be displayed on screens throughout Songdo and RFID tracking could be used to pinpoint their location. In daily practice this monitoring appears to mostly concern traffic flow on the city’s streets and other infrastructural maintenance. 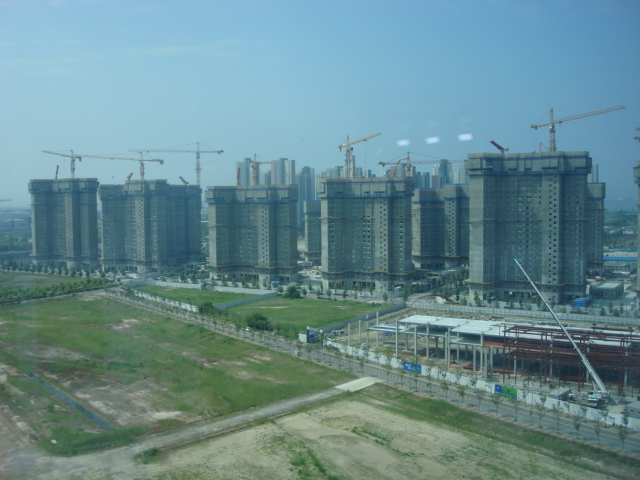 Having come from the densely packed and winding streets of Seoul I was struck by the scope and scale of the Songdo development. It is a truly monumental space, in multiple senses of the word. The buildings aspire skyward in an ersatz Manhattan verticality that has also characterized new urban structures in places like Dubai and throughout China. Unlike Manhattan, however, the buildings of Songdo are not claustrophobically constrained between the geographical restrictions of the East and Hudson rivers. Rather these skyscrapers are spaced out around stretches of artificially constructed green spaces that explicitly invoke New York with names like “Central Park,” and also evoke the monumental distancing of the national mall and similar spaces in Washington D.C.

There is an eerie incongruity between the scope and scale of this development and the comparatively paltry population visible on the ground. It seems as if Songdo was built all at once with the capacity to house hundreds of thousands, and now the buildings are sitting vacant waiting for residents to arrive. We talked with some Cisco employees who live in Songdo and they described some of the impediments to attracting new residents (such as lengthy commuting time between Songdo and Seoul), while also claiming that all available real estate was already filled, and the new construction was barely keeping up with demand. I can only assume that a significant portion of the available housing is owned but not occupied, as a form of investment by international parties for example. The affective result of this situation at street-level is uncanny, as broad avenues and expansive plazas appear to hold a fraction of the capacity they were evidently designed for. 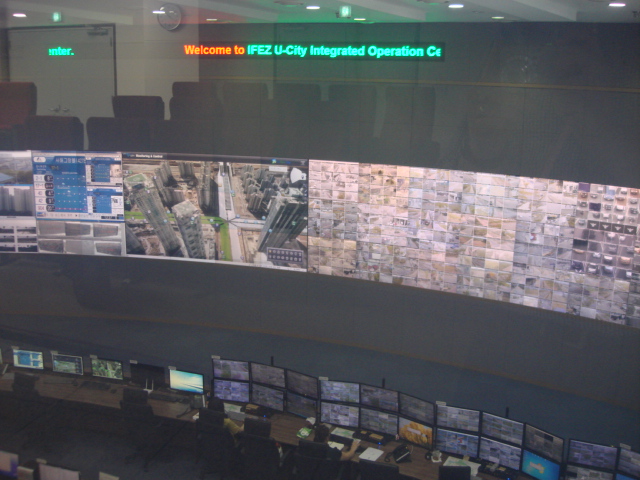 We were also given a look into the “mission control center” of Songdo. This is the nerve center, the base of operations for U-city. As you can see in the photo, the control room is dominated by screens displaying hundreds of real-time scenes transmitted by surveillance cameras. In a continuation of the eerie incongruity between the scale of the environment and the number of occupants, we were surprised that such a complex control center was manned by only two people. Dozens of chairs and computer stations were vacant, and our guide explained that the other engineers of that shift were working “in the field,” attending to the city’s infrastructure. It was also striking to see so much concern for monitoring traffic flow when most of screens displayed images of empty streets during our visit.

This incongruity, the disparity between the aims of the built environment and how the space is actually used, was a definitive aspect of my perception of Songdo. There are many cases of such disparities throughout the history of urbanization. Many times there has been a disjuncture between the administrative rationality and the “eye” of top-down planning techniques on the one hand, and the quotidian needs and desires of lived experience on the other. The conflict between abstract representations/conceptualizations of space and the vagaries of embodied use of space finds a new expression in “built from scratch” settlements like Songdo and other examples of smart city initiatives around the world. The Cisco employees we met with described each of their company’s technologies and services as “solutions” without exception. As our group traversed mostly empty streets and sidewalks, many of the innovations on display in Songdo began to seem like solutions in search of a problem. Shouldn’t urban design and policy respond to the needs of citizens rather than impose pre-packaged prescriptive techniques for their own sake? As urban development itself becomes increasingly ubiquitous on the planet, it is worthwhile to interrogate how and why certain developments are considered “smart”, and whether such approaches account for the inherently adaptive intelligence required for the navigation of everyday life.