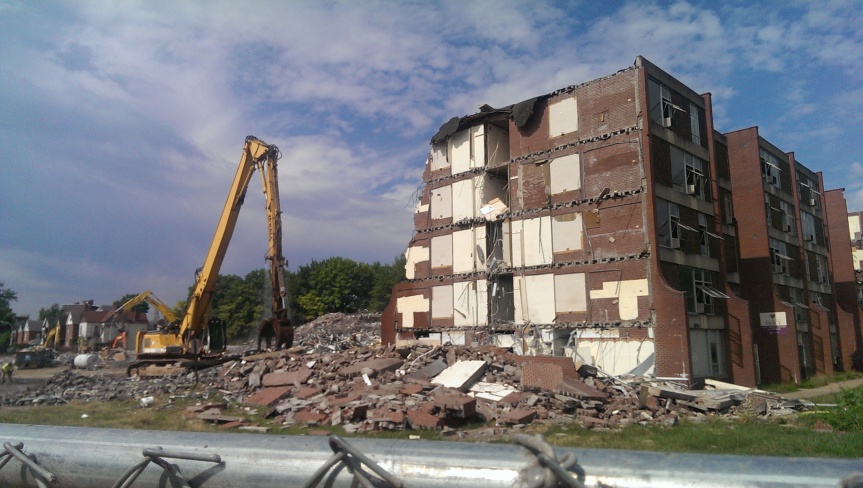 I used to live one street over from the Penn Plaza apartments, one of the last affordable housing complexes in Pittsburgh’s East Liberty neighborhood. The other low income rental units and high rise housing towers, built as part of sweeping urban renewal projects starting in the 1960s, have all been demolished and replaced with market-rate apartments and retail space. In the summer of 2015, the 200+ residents of Penn Plaza received notices that the property owners had sold the land for redevelopment, and giving tenants 90 days to vacate the premises. Following uproar from tenants and other community members who were shocked at the manner in which this decision was made and communicated, the city intervened to delay both the evictions and the demolition (the second of the two buildings is still standing, and people still living there have until March to relocate).

The developer’s plans for the Penn Plaza space was finally revealed this past summer: new high-end rental units and businesses including a Whole Foods grocery store. Whole Foods has earned ire for its expensive and sometimes outlandish offerings, is identified with an affluent-white consumer ethos, and has become iconic of gentrifying development (see the season-long gentrification arc on South Park in which the arrival of Whole Foods in a formerly divested neighborhood is treated as the catalyst for a demographic shift). The announcement that the Penn Plaza site was to house a new Whole Foods carried a particularly bitter irony because there already is a Whole Foods in the neighborhood, essentially across the street from the proposed location (calling it a stone’s throw away seems accurate). The current Whole Foods store in East Liberty opened in 2002 amidst the arrival of similar corporate retail outlets and other new developments that heralded the neighborhood’s rapid gentrification. The market was built as part of a suburban-style shopping center with accompanying parking lot that seems to be invariably congested and unfailingly irritating to shoppers, cars and buses trying to pass by on the street, and especially pedestrians using the adjacent city sidewalks. The new Whole Foods would include a larger parking lot, part of what a company representative described as “new opportunities to surprise and delight our expanding base of shoppers in Pittsburgh” (blech).

Last week the city planning commission unanimously rejected the developers’ proposal for the Penn Plaza site. This decision was unexpected, and received cheers and ovation when it was announced in the commission meeting. Why had the commissioners resoundingly rejected the plan? Their decision seemed to hinge upon a perceived lack of community engagement. As reported by the Pittsburgh Post-Gazette:

“It begins with and ends with the community engagement piece. And at the end of the day, I don’t believe there was any evidence that there were result-oriented parts of the application and presentation that proved that the community gave input,” said commission vice chairwoman Lashawn Burton-Faulk.

The representative for the developers disagreed with this assessment:

Jonathan Kamin, attorney for developer LG Realty Advisors, said afterward that he was disappointed with the decision, arguing that the proposal met all of the requirements needed for approval.

He disputed the commission’s contention that the plan lacked community input. He said the developer held more than 35 meetings with the various constituencies and groups, adding it was “public engagement like the city has never had.”

What to make of this discrepancy in interpretation? Why did the planning commissioners consider the level of community engagement deficient when the developer believed they had conducted an unprecedented degree of engagement? At issue is the very definition of community engagement and the standards to which such practices should be held. Community or public engagement has emerged as a procedural standard in urban planning and development, and while such engagement practices may fall short of realizing the ideals of deliberative democracy to which these terms seem to aspire, at the very least it has been accepted as part of the “due diligence” of the development process. In this most recent decision on the Penn Plaza development there is an evident contrast between standards of quantity and standards of quality. The attorney for the developers cited the number of public meetings held as evidence of “public engagement like the city has never had.” The commission members, by contrast, cited a shallowness of responsiveness as indicative of the poor quality of engagement. Can one-way communication be considered sufficient “engagement”? In this case the planning board is arguing that it cannot; the developers may have held 35 meetings informing attendees of their plans, but their process did not reflect any substantive response to community input, and this was a crucial factor in the commission’s rejection. Of course, one major question that bears asking in this case is: why was there no requirement for community engagement before people were displaced and their homes destroyed?

It remains to be seen what will become of the Penn Plaza site (as well as the ostensibly public park space situated on the lot), and although the planning commission’s decision doesn’t reverse the displacement of hundreds of East Liberty residents, I still find it heartening. This decision signals that city managers are taking community engagement seriously, holding such practices to a standard beyond a mere perfunctory formality, and requiring they be more meaningful than an empty gesture. I am currently working on a study of community engagement practices in another major redevelopment project in Pittsburgh, so I found last week’s news of the planning board’s decision especially salient. More than affirming my own interest in studying community engagement practices, it demonstrates that the theory and practice of public engagement can bear material consequences to urban development projects. I hope that this result will inspire planners and developers to raise their own standards for community engagement.