Not quite as ubiquitous, but still extremely common, are PC Bangs: LAN gaming hangouts where 1000 Won nets you an hour of multiplayer catharsis. In Gangnam’s Maxzone, overhead fans rotate at Apocalypse Now speed, slicing cigarette smoke as it snakes through the blades. Korea’s own NCSoft, whose European base is but a stone’s throw from the Eurogamer offices, is currently going strong with its latest MMO, Blade & Soul.

“It’s relaxing,” says Min-Su, sipping a Milkis purchased from the wall-mounted vending machine. “And dangerous,” he adds. “It’s easy to lose track of time playing these games, especially when you have so much invested in them. I’m always thinking about achieving the next level or taking on a quick quest to try to obtain a weapon, and the next thing I know I’ve been here for half the day.” 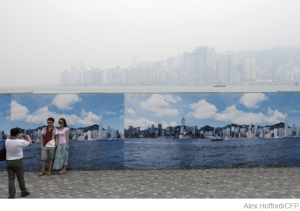 Creation and simulation in virtual worlds appear to offer the best domain to test the new ideas required to tackle the very real problems of depravation, inequality, unemployment, and poverty that exist in national economies. On that note the need to see our socioeconomic institutions for the games that they really are seems even more poignant.

In the words of Vili Lehdonvirta, a leading scholar in virtual goods and currencies, the suffering we see today is “not some consequence of natural or physical law” it instead “is a result of the way we play these games.”

The global economy seems to be bifurcating into a rich/tech track and a poor/non-tech track, not least because new technology will increasingly destroy/replace old non-tech jobs. (Yes, global. Foxconn is already replacing Chinese employees with one million robots.) So far so fairly non-controversial.

The big thorny question is this: is technology destroying jobs faster than it creates them?

We live in an era of rapid exponential growth in technological capabilities. (Which may finally be slowing down, true, but that’s an issue for decades hence.) If you’re talking about the economic effects of technology in the 1980s, much less the 1930s or the nineteenth century, as if it has any relevance whatsoever to today’s situation, then you do not understand exponential growth. The present changes so much faster that the past is no guide at all; the difference is qualitative, not just quantitative. It’s like comparing a leisurely walk to relativistic speeds.

We begin with a love story–from a man who unwittingly fell in love with a chatbot on an online dating site. Then, we encounter a robot therapist whose inventor became so unnerved by its success that he pulled the plug. And we talk to the man who coded Cleverbot, a software program that learns from every new line of conversation it receives…and that’s chatting with more than 3 million humans each month. Then, five intrepid kids help us test a hypothesis about a toy designed to push our buttons, and play on our human empathy. And we meet a robot built to be so sentient that its creators hope it will one day have a consciousness, and a life, all its own.

“These outages are absolutely going to continue,” said Neil MacDonald, a fellow at technology research firm Gartner. “There has been an explosion in data across all types of enterprises. The complexity of the systems created to support big data is beyond the understanding of a single person and they also fail in ways that are beyond the comprehension of a single person.”

From high volume securities trading to the explosion in social media and the online consumption of entertainment, the amount of data being carried globally over the private networks, such as stock exchanges, and the public internet is placing unprecedented strain on websites and on the networks that connect them.

What I want is systems that have intrinsic rewards; that are disciplines similar to drawing or playing a musical instrument. I want systems which are their own reward.

What videogames almost always give me instead are labor that I must perform for an extrinsic reward. I want to convince you that not only is this not what I want, this isn’t really what anyone wants.

This ‘celebrification’ is enlivening making games and giving players role models, drawing more people in to development, especially indie and auteured games. This shift is proving more prosperous than any Skillset-accredited course or government pot could ever hope for. We are making men sitting in pants at their laptops for 12 hours a day as glamorous as it could be.

Creating luminaries will lead to all the benefits that more people in games can bring: a bigger and brighter community, plus new and fresh talent making exciting games. However, celebritydom demands storms, turmoil and gossip.

Spielberg’s theory is essentially that a studio will eventually go under after it releases five or six bombs in a row. The reason: budgets have become so gigantic. And, indeed, this summer has been full of movies with giant budgets and modest grosses, all of which has elicited hand-wringing about financial losses, the lack of a quality product (another post-apocalyptic thriller? more superheroes?), and a possible connection between the two. There has been some hope that Hollywood’s troubles will lead to a rethinking of how movies get made, and which movies get greenlit by studio executives. But a close look at this summer’s grosses suggest a more worrisome possibility: that the studios will become more conservative and even less creative.